Atlassian Certification Program: Tips for studying for your ACP exams 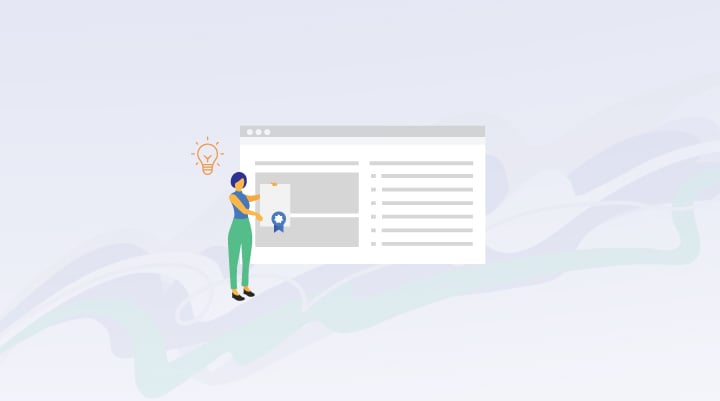 Atlassian Certification Program (ACP) exams are a great way to enhance your Atlassian skillset and better leverage the tools at your organization. Atlassian offers a few different exams, depending on what aspects of the tools you're focused on and your current skill level. If you pass, you get a nifty badge you can place on your LinkedIn profile or email signature! Here at Praecipio Consulting, all of our consultants have taken at least one of the available ACP exams, and we have some great tips and tidbits to share that will help you prep for the tests and understand what they entail.

A little bit about the exams

When studying for any exam, it's important to figure out how you best learn the material. Is it taking notes by hand so you don't have the distractions of a laptop? Or, are you more like me, where you tend to lose loose leaf paper so you prefer to type out what you've learned? Either way, the best tip I used to prepare for my exams was to organize my notes into a comprehensive study guide. Atlassian requires the completion of specific courseware before you can take the exams, and they provide downloadable PDFs for each exam topic. All of this information is great for your study guide. You can use a good ol' fashioned notebook for this, or, if you have access to Confluence, create your study guide there. I took notes on the courseware in Confluence, then used macros and Tasks to organize my notes and remind myself of topics that I needed to focus on. Because the exams cover a lot of material, flashcards are another great way to memorize information. There are several online services that allow you to create flashcards for free, such as Quizlet. Repetition works wonders when studying for any exam, so be sure to review your study materials several times.

Practice in a test environment

If your way of learning is by doing, a great way to prep is by reviewing admin functionality in your Jira or Confluence instance, especially if you have a test or demo environment. Project schemes, permissions (project and global), and workflow functionality can provide helpful knowledge around exam items. Chances are, if you're taking an ACP exam, you already have access to a Jira and/or Confluence environment, but if not, Atlassian offers a free Cloud instance if you're maintaining 10 users or less. Keep in mind that some exams only focus on Server functionality, but it's still great to get a visual for the items you'll be tested on.

Collaborate with others prepping for the exam

At Praecipio Consulting, we are all about teamwork. As I was prepping for my exam, so were several other Praecipians. We collaborated on our notes, shared our study guides, and had study groups. Sharing our thoughts and notes allowed us to each figure out our strengths and weaknesses around the exam material so we could help each other be successful. If you're the only one at your organization taking the exam, or are just deciding to do it individually, no worries - there are folks all around the world looking to get certified! If you venture over to the Atlassian Community, there are often discussions that folks have started to create study groups with members of the community (check out this post around the ACP-100).

Stay in tune with your physical and mental state

Prepping for and taking any exam is physically and mentally exhausting. It's important when studying to allow yourself breaks to better absorb the material. As I studied, I'd create incentives and goals around my study material. Once I got through half of my flashcards, for example, I'd watch the next episode of my newest Netflix addiction or read a chapter of my favorite book. That way, I had something to look forward to when studying and allotted plenty of time for brain breaks. When it comes to taking the exam, try to find a quiet space in your home where you can remain undistracted. If you get stuck on a question, mark it and come back to it - you've got 3 hours to get through the questions, so take your time! Remember, your well-being is a key factor in being able to focus and perform your best, so it's important to keep it in check.

Good luck with your next exam, and let us know if your organization needs further support with how to best leverage your Atlassian applications.

Bamboo 3.4‘s ready for download and ready to spread a little joy for the holidays. This release provides some gifts for Atlassian’s Git users, and will bring joy to those expanding their continuous integration process into the cloud.

Git users can get more out of Bamboo during their holiday break. Satisfying many votes from our Git users, Bamboo’s integration with Git’s now compatible with Git submodules. Git submodules are simply a reference to another repository at a particular snapshot in time.

The new support for Git submodules allows Atlassian users to structure your projects the way you want, and makes it easy to build multi-module projects. The full capabilities of your Git client are now at your disposal for Git-based development. Simple and powerful, just like Git! 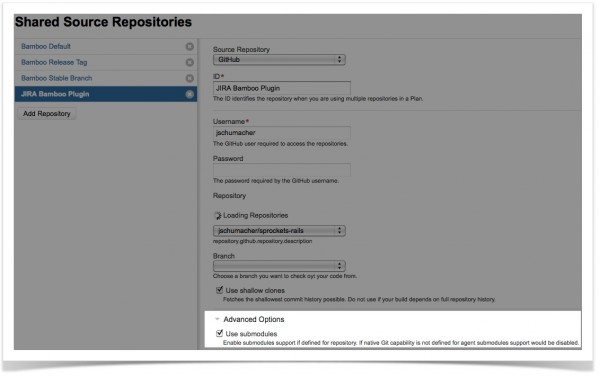 A huge time saver for those trying to keep repositories in sync across multiple plans.

Define a shared repository that can be used globally. From there, you can share the configuration with as many plans as you want.

After you update your shared repository configuration, the changes will be picked up by all Plans that use that repository. Share away!

Grow in the Cloud – Elastic Agents with Windows Support

Give your team the ultimate gift, more build power. For those of you taking advantage of elastic agents in the Amazon EC2 cloud, Atlassian now has Windows and .NET support.

Growing capacity
Considering growing your Windows instances without having to install Windows? It all comes within an Amazon EC2 image. After the image is spun up, you can be easily connect to your instance with a Windows Remote Desktop application from any operating system.

Windows application testing
Windows instances from Amazon are great for any Windows installer testing. Like a typical VMware image, an EC2 image can easily be discarded after use, which is important because some Windows applications leave too much left over in the registry. If you need to test Internet Explorer for your web front end tests or Microsoft SQL Server for your database backend, it’s all possible on Amazon EC2.

Saving installed applications
Just like Linux AMIs, you can install any packages, add software, and make system configurations. Easily save these changes to your new AMI image, which can be added to your Bamboo EC2 Image configuration.

Windows EC2 with Amazon and Bamboo allows for elastic growth to meet your demands.  Don’t have enough VMWare hardware to go around? Expand your build system into the Amazon cloud, along with Bamboo’s elastic agents.

“Easy on the Eyes” Emails

There’s alot of “bling” flashing around, so Atlassian decided to make emails more “blingy”. There are many options to receive builds notifications in Bamboo – RSS, instant messenger, IDE pop-up, through Jira and email (the most popular). The goal of all these notifications is to digest the information you need quickly, so you can resolve any issues. The new email template makes it a whole lot easier to find important information about a build at a glance. Identify which test(s) failed, view code changes, and jump to the context of changes directly from the email. Not to mention, it looks and feels like the Bamboo UI. 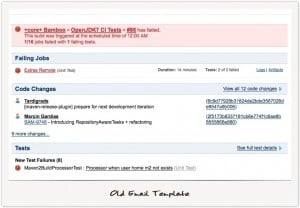 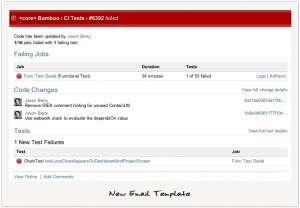 Sensitive information’s now even more secure in Bamboo. Verify that remote agents are allowed to connect to the Bamboo server, and prevent unknown agents from connecting to the server. When Agent Security’s enabled, an administrator must manually approve agents before they can communicate with the server in any way.

This release has over 107 new features and improvements implemented. Check out the full release notes for more details.

The Bamboo Holiday Release is now ready for download – get started with a 30-day FREE trial or upgrade your current instance.

Or upgrade to Bamboo 3.4