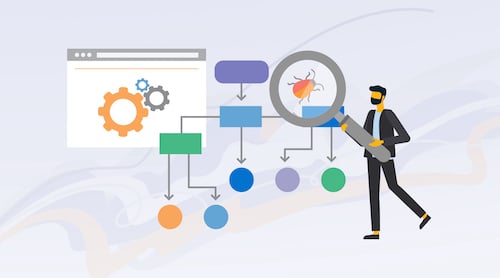 The short answer: Not really. Stories and bugs are both software development items by different names. As such, the vast majority of activities and controls that we model for a story are applicable to bugs. The key distinction between stories and bugs often comes down to data. Bugs should include Affects Version/s, Steps to Recreate, Expected Behavior, and Actual Behavior. How and when we require this data relies on what practices we're observing.

The considerations above work well in workflow cases where you have gated controls as a function of status change. This might apply to teams that include requirements definitions and design efforts within the story or bug life cycle (as might be the case with Waterfall). Additionally, this logical approach allows for workflow reuse which in turn decreases administrative burden and increases process consistency.

Scrum teams view Ready for Development a bit differently. Good Scrum practices dictate that product owners will refine their backlog as items are prioritized upward. Refinement provides all functional details necessary for the scrum team to be able to work the ticket including validation of bug reports and associated details. Once prioritized, the development team will review stories and bugs at the top of the backlog to make sure they understand the requirements. The work is considered Ready for Development at the moment it is accepted in to a sprint.

I hope this explanation helps you avoid unnecessary workflows!

Affects Version vs. Fix Version in Jira: What's the Difference?

In today's post, we'll address the age-old question: which came first, the Affects version (egg) or the Fix version (chicken)?

Both of these fields are automatically created in Jira out of the box. They are related to Software Development Life Cycle (SDLC) projects and are the foundation of releases in Jira. While they are linked and work in tandem at some points, there is a best practice when using the versions inside of both of these fields. Before we delve into how they relate, let's define what each field is and how to properly utilize them.

What is Fix Version?

Fix version is the release version used to track different software developments and/or any updates. You fill out the Fix version to ensure that as you develop stories, and you can group them together when setting up a release delivery. This release could contain multiple issues created to serve different client needs, and this is designed to help each development team and PO (product owner) track all code to be released at one time.

What is Affects Version?

The Affects version allows you to track bugs or defects that exist in already-released code. The bug will have a new Fix version on it, which will designate the code release where you can find the solution. Additionally, you can query off of this field to identify which code is having problems after its development and scheduled release.

When using these fields, start by tracking releases through the Fix version field first, then use the releases to connect any bugs you found to the Affects version field. This does not stop anyone from using a new Fix version on the bug issue and linking it to a new code release.

I hope this information will help settle any office disputes about which comes first! You should now be able to communicate through examples with Jira. Think about it this way: if the egg came first, the system would be ineffective, so the chicken most definitely came first. If you want to have a friendly debate about this age-old question or discuss anything related to Jira and/or software development, reach out to us!

You’ve been asking for it, the Bitbuket team has even joked about it – now it’s here (for real): for the one year anniversary of Bitbucket joining Atlassian, they’re announcing Git support.

All your source, all in one-place
Whether you are using Hg or Git, you can now keep all of your code in one place with your preferred DVCS format. If you have existing code you would like to migrate, you can easily import your Git, Mercurial or Subversion source code. Atlassian’s added a new importer for GitHub to our existing site importers which include SourceForge, Google Code and Codeplex.

UI improvements have been happening gradually over the past six months:

Today’s release includes a new UI for the repository and user administration pages. A never-ending goal is to make Bitbucket easier to navigate and use the operations you need fast.

Get your Git on

If you haven’t checked us out lately, Bitbucket has had a year of record growth – more than tripling the number of accounts since the acquisition, adding over 350 improvements, bug fixes and new features. Sign up now (no credit card required) and get unlimited private repos for free!

Were do I find the latest updates about Bitbucket?
Visit the Bitbucket blog at http://blog.bitbucket.org.